Sri Sarada Devi, lovingly called Holy Mother, is the wife of Sri Ramakrishna. She is worshipped by many as an incarnation of Mother Goddess. Her life was full of austerities and spiritual practices In her later life she guided thousands of spiritual aspirants and became the spiritual head of the Ramakrishna Order.

In a small village in Bengal called Jayaramvati the Holy Mother was born on December 22nd 1853. She was named Sarada. She was very active, helping her mother cook and looking after her little sister and brother. She was a busy little girl full of compassion for the poor and ever ready to serve them. At a very young age she was married to Sri Ramakrishna. Their relationship was never physical. “Marriage can be for spiritual companionship” is exemplified in the life of Sri Ramakrishna and Holy Mother. In 1886 Sri Ramakrishna passed away, gradually the Holy Mother has to take on the role of being the spiritual leader of the Ramakrishna Order that was established by Swami Vivekananda. Sarada Devi was like a mother to all the devotees. Just as a mother in the family cares for all her children, worries about their welfare, loves them intensely, even so was the Holy Mother to the devotees. In the final days of her life she said to a woman devotee: “Let me tell you something. My child, if you want peace, then do not look into anybody’s faults. Look into your own faults. Learn to make the world your own. No one is a stranger, my child; the whole world is your own.” This was Holy Mother’s last message to humanity. She passed away on 21st July 1920. 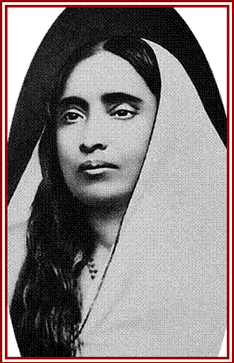